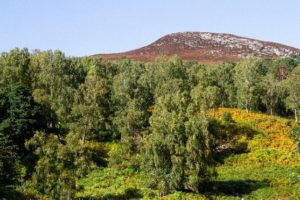 My first impression was the variegated greens of the trees…and the thought that this is what the forest looked like in Roman times. And just beyond the treetops, in the distance, I could see the barren hilltops.  And that’s when it hit me.  Here we were doing our bit to help bring the lush Caledonian Forest back to a full, vibrant, and wholesome life on the Dundreggan Estate not far from Loch Ness.  There’s been some discussion of whether the name refers to “dragons” and our focalizer Peter Underwood affirmed that indeed there are dragons on the estate…”dragon-flies”.  But only during the season for them.  The true meaning of the word Dundreggan remains somewhat obscure.

For the dozen or so of us from ConservationVIP, this was going to be traveling with purpose.

Our guides, or “focalizers” as they are called, Stephen Couling and Peter, told us about the history here, and how Trees for Life is putting volunteers like us to work nurturing seedlings, protecting fresh plantings, and in general trying to restore the ancient woodlands here.   Since before the times of the Roman occupiers, people have been felling the original trees from this temperate rainforest, which Pliny the Elder of those times called “silva caledonia”, and later it became the “Caledonian Forest”.

The estate takes in some 10-thousand acres and between this land, and other plots nearby, Trees for Life is trying to resurrect and reconnect the old woodlands with the help of volunteers.  The workers team up with professional foresters here for a few weeks during spring and fall.  In nurseries, in the woods, and along the river, they are all helping to put nature back in its place.  By recreating forested corridors and restoring the woodlands, Trees for Life is putting the pieces back in place to let nature do much of the hard, and natural, work to bring the forest back on its own. 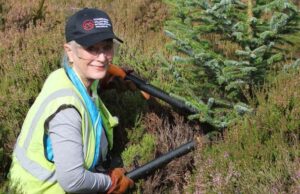 Set along the edge of the River Moriston, the estate is chock full of trees…”good” trees and “bad” trees.  The task was for the volunteers to take out the bad to make for better growing conditions for the good.  Sounded simple enough.  We had to learn the difference from the two, but after a bit it became easy to tell the ones which would crowd out the other and the volunteers set their saws to humming to make way for those that would best mimic the original forest.  There’s not enough staff at the estate to handle this kind of duty, so volunteers make a real difference. 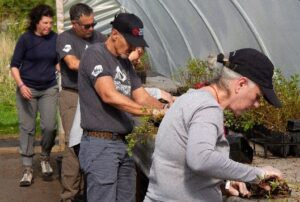 Next, under the guidance of Nursery Manager Jill Hodge, our crew set to transplanting seedlings, helping make them ready to be taken to select areas of the estate for planting.  The volunteers set right to work.  But it wasn’t “work” really, more like “joy” since everybody had dug right in and set about the task, kind of chirping away about how happy they were to be a part of this project.

As for real work being done, the volunteers posted some impressive numbers.  They:

Packed 7,782 seedlings for the next set of volunteers to take into the highlands and plant;

Basically, ConservationVIP volunteers did a lot of work helping Trees for Life in their quest to restore the Caledonian Forest…at least here at Dundreggan Estate.

And all of this in just 7 days. 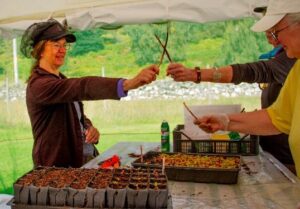 It was great to see how this group of “strangers” came together at Dundreggan and made things happen.  And not just in the nursery or up on the hills…we actually were living on the compound and joined together to cook, clean and converse about the task at hand.  The dozen of us divided into smaller groups to cook vegetarian dinners every day…but the kicker was Stephen Couling’s breads that he created.  Stephen used flour from ancient varieties of wheat in his modern recipes a couple of times and each one was hearty and delicious…

So, the dream of restoring the Caledonian Forest is alive and well.  And for a brief period of time, there we were, hands-on, getting dirty, and belonging to something bigger than ourselves.  Can’t wait till next time. 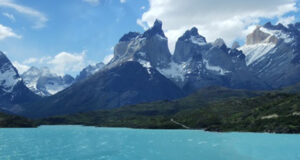 Previous post What Does Patagonia Have in Common with the French Alps? 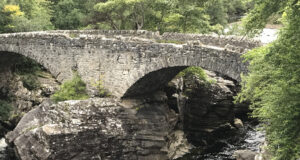 Great job Peter! Thanks for helping us document such an important mission….. to re-wild the Caledonian Forest.