What are Special Projects?

ConservationVIP has sponsored a number of Special Projects to help our destinations. These are projects which required longer time commitments, specialized skills, and funding to implement, beyond the scope of what was feasible on our shorter volunteer trips.

Our first Bridge on the Circuit in Torres del Paine 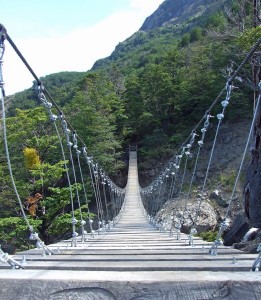 As ecotourism increased, Torres del Paine National Park’s resources became severely strained. Every year after the snow melted, Park rangers had to re-establish hiking trails through the deep gorges (“quebradas”) on ‘the Circuit’ — the major trail in the park. A bridge on the first gorge, near the foot of Grey Glacier, was high on the Park’s list of urgent needs. The bridge would greatly improve safety for hikers, offer a fantastic view of Grey Glacier, and encourage visitors to explore this gorgeous section of the Park, relieving overcrowding in other areas. But the Park simply did not have the money. […more ]

In 2014, CONAF determined that construction of a bridge to cross the Second Quebrada was a top priority for the Park. ConservationVIP® set about raising money for the materials while Richard concentrated on design details, purchasing materials, and assembling the right team of people for the special challenges presented by the site. Yosemite National Park, which is a sister park to Torres del Paine, agreed to send two employees with excellent cable, rope, and rock skills to assist with the critical first two weeks of construction. CONAF purchased a rock drill and focused on logistical support. […more ]

Like the First Quebrada and Second Quebrada bridge sites, the Third Quebrada needed a bridge to improve the safety of both park rangers and backpackers who hike the Circuit in Torres del Paine National Park. This gorge crosses a stream which carries a substantial flow of water. Crossing the stream is difficult at best and impossible when the water is highest. And, like the first two bridge sites, construction of the bridge over the Third Quebrada posed special challenges. […more ]

To protect the environment of one of our beloved destinations, ConservationVIP® initiated a project to deal with a problem that many people would rather not think about – human waste disposal. Torres del Paine National Park in Patagonia, Chile was struggling with a growing human waste problem caused by an increase in visitors. The Park managers were searching for a sustainable system that would reduce both the amount of human waste and the cost of maintaining their backcountry facilities. ConservationVIP® knew the right person to help the Park […more ]

In 2015, CONAF – the Chilean agency entrusted to manage Torres del Paine National Park – asked ConservationVIP® about the viability of building a new trail in Torres del Paine. The new trail, on the south side of Lago Skottsberg, would roughly parallel the existing section of the “W” trail between Refugio Paine Grande and Campamento Italiano and would relieve severe overcrowding on that section of the W. The proposed route followed an old horse trail which crossed the outlet stream from Lago Skottsberg. Fording the stream was not a problem for horses, but we knew that some hikers would have trouble crossing the stream without a bridge. […more ]

People who participate in volunteer trips with Conservation Volunteers International Program often develop special connections to the places where they have volunteered. These bonds sometimes inspire even more extraordinary donations of time, skills or money to help the destination. One such special volunteer effort was the Medical Emergency Response Training for the Rangers and Guards at Machu Picchu in November 2019. […more ]

Boardwalk on the W

In February 2020, volunteers from ConservationVIP® assisted by volunteers from TdP Legacy Fund, completed the construction of 1,110 feet of boardwalk on a new section of “the W” hiking trail in Torres del Paine National Park in Patagonia, Chile. This boardwalk was a critical link in a major new hiking route which will reduce congestion on the W. […more ]

In early 2020, ConservationVIP® volunteers constructed a 120-foot (37-meter) suspension bridge across Rio Frances in Torres del Paine National Park. The bridge across Rio Frances is an important link in the popular “W” hiking trail in Torres del Paine. The section of the “W” between Refugio Paine Grande and Italian Camp is one of the most heavily traveled trails in the Park, with up to 1,000 hikers per day in peak season. The old bridge had deteriorated to the point that it was only safe for one hiker at a time to cross. […more ]