Thom Breathnach, a volunteer and writer from Ireland, recounts a week of volunteering in America’s favorite National Park. You can follow Thomas on Instagram @thombreathnach

Call it the ultimate call of the wild. As post-pandemic tourism numbers return and travel hotspots heat-up across the world, I’d long wanted to join one of the growing number of international volunteer programmes to tackle the increasingly evident woes of over-tourism. So last month, I signed up for the ultimate altruistic adventure by channeling my inner park ranger (or perhaps lumberjack!) and headed to California’s wilderness wonderland, Yosemite National Park, to volunteer.

After witnessing a fireball sunset over the Golden Gate Bridge, I finally reached the South Entrance of Yosemite National Park, 320km shy of San Francisco.

“You can use the employee lane from now on!”, the park ranger advised me from the booth as I flash my NPS Volunteer pass like it’s a golden ticket to the Oscars. I was in. But not quite in. Yosemite is vast; a 3,000km² wilderness almost half the size of County Cork — and a further hour hits the clock before I wind down to Yosemite Valley with its waterfalls, forests and jaw-dropping granite formations where I reached my dream base for the week, North Pines campground.

I was traveling with Conservation VIP®, an eco-minded non-profit organization who offers volunteer programmes in heavily trafficked UNESCO sites across the world and welcoming me on-site are my trip leaders Michael Chambers-Purcell and Danielle Simpson. I’m joined by seven fellow volunteers, an eclectic gathering of Americans from nursing students to retired physicists. After setting up camp (it’s B.Y.O tent) and enjoying our first camp dinner, it’s an early night, the distant thunder of Vernal Falls offering nature’s perfect lullaby.

“Did you guys hear that rattle last night?” It’s my first wake-up in Yosemite and with no Wi-Fi signal, rumbling of a bear in camp is the news of the day. Or of the morning, at least. Our day starts at 6:30am with freshly brewed coffee offering a welcome antidote to some camp sniffles following a chilly night: can dip down to below 5°C at night here in May.

Our working week began at breakfast where, like every day, we’re joined by park rangers (and all-round super cool dudes) Eamon Schneider and Matt DiNome who’ll both brief us and supervise us on our projects ahead.

Our first task, under the sheer magnificence of El Capitan mountain was (roll up that plaid shirt) splittin’ timber. We were participating in a pilot programme at Yosemite where fallen cedar trees are being repurposed as guard rails to both protect park vegetation and stop the current import of rail timber from Idaho. Wedges and sledgehammers in hand, we get to graft. I was teamed up with retired geologist, Thomas, from the Bay Area, and after a day of debarking, chipping and heaving our team has created a sizable stock of posts to surely safeguard a meadow or two.

Back at camp that evening, a fine dinner (pasta with freshly caught rainbow trout) awaited, courtesy of our group’s very own camp caterers, Dawn Pliche and partner Keary who also own a farm just outside the park.

Day three, was a case of cultural conservation. Our station for the day was Wahhoga Village; a Native American settlement in Yosemite which was controversially demolished by the NPS fifty years ago but is today being revived as a cultural centre. Bill Tucker, a native Miwuk Indian who grew up on the site, welcomes our team to the village, offering us a guided recce (recon) of Wahhoga which still features everything from ancient granite mortar holes for grinding acorn flour to traditional cedar wood roundhouse. Task in hand? To reroute a stretch of the Yosemite Valley Loop trail flanking Wahhoga to offer more privacy to the village.

We get to work, all assigned different tasks and all under the watchful eye of NPS archaeologist Erin Gearty (should we uncover an artefact along the way). I was on lopping duty and with the guidance of ranger Matt, a park arborist, I got to trimming trees as sensitively as possible, bearing in mind that many species, like the black oak, are sacred to the tribe. Matt also schools me about everything from trail architecture to hiker psychology i.e., creating routes that don’t tempt short-cutters as well as staging felled branches in as natural a setting as possible. I was starting to see hikes in a whole new light.

By the end of the afternoon, 6hrs and 400 yards later, our new trail is established, and we even welcome our first user; a horse-back rider trotting down through the route. We’re even receiving gentle applause at this stage.

Today, we headed off to the gushing backdrop of Bridalveil Fall to create a new, low impact primitive trail to lure hikers off the main roadway into the valley. Evening time typically affords us two hours to squeeze in a pre-dinner hike, so tonight I headed to one of the most popular short routes, Mirror Lake. “You’re now in Cougar Country” announces the trail sign (honestly, if it isn’t one thing it’s another here!) but this is a heavily trafficked route and spared from any heart-stopping wildlife encounters, I soon reached the spectacular crystal-clear lake. Yosemite is truly a non-stop blockbuster.

Our final work day and we’re out on patrol. First stop is securing the boardwalk across The Fen, a rare wetland habitat in Yosemite where our morning chorus of hammering makes short shrift of any exposed nails along the route. “The bikers and bare-footed hippy hikers thank you”, joked the ranger. Next, it was back to Wahhoga to block off the old trail with felled material and in the afternoon, we returned to Bridalveil Fall for the all-hands-on-deck removal of a dead tree crossing the trail. In turns, we axe through the tree’s gargantuan girth (Matt estimated it could be 600 rings old) before we finally hoist the tree from the passage, clearing the route. The next troop of volunteers would pick up where we left off!

After our merry week of NPS grafting, Friday in Yosemite was our designated rest day. If you’d call it that. I was embarking on a seize-the-day-off hike to the iconic Glacier Point, a 26km round trip from camp. Striking off, and weighed down with five litres of water, packed lunch and my final rations of Aldi trail mix, I head up the mountain wilderness, my camp mate Nikee carrying bear bells which, paired with a sing-song, would prove a bear deterrent.

Only 10% of the 4 million annual visitors to Yosemite venture beyond the Valley and the crowds peter out with every step….by the time I reach 2000m, our camp pack has thinned and I’ve not seen a soul for an hour. But seven hours after setting off and passing the Nevada Falls and spectacular panorama trail cliffs, I reach Glacier Point as Yosemite’s untamed wilderness spilling out to awesome infinity. I can see why they are called Sierra Nevada (snowy mountains in Spanish). Back at camp that evening, we enjoyed the last supper at camp but most importantly accepted the literal badge of honour to mark our week’s efforts …I’d officially graduated as a Yosemite volunteer!

6am and my fellow volunteers are stealthily beginning to decamp; there are home journeys to LA, flights back to Ohio and onward road-trips to Alaska ahead. Parting hugs and sincere “see you next times”. Later we had upped sticks and tent pegs filled by a week which, in the best possible way, had felt like a month.

Carving my Chevrolet out the valley that morning almost felt like a “best bits” montage from Big Brother: Yosemite. I passed the spot where we split timber on our first day, spotted hikers enjoying our new trail at Wahhoga, while Glacier Point, our hiking highlight, loomed spectacularly in my rear-view mirror. But with one extra day until my flight, I decided to stick around to experience the one thing which had eluded me deep in the valley: and parked up that night over Sierra Nevada to watch my first Yosemite sunset. 100% guarantees it won’t be my last. 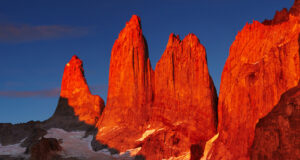 Previous post Building a new Trail to The Towers